All Your JUUL Questions, Answered JUUL is a brand of electronic cigarette, more commonly referred to as an e-cigarette. JUUL e-cigarettes are both high-tech and easily concealable. The smoking device resembles a USB flash drive and can be charged in the USB port of a computer. JUUL is promoted as an alternative to combustible cigarettes for adults but has been widely criticized by the Food and Drug Administration and the general public for youth use of the product. JUUL’s sleek design, combined with its variety of pod flavors, has contributed to its growing popularity among youth. The device has become so common among teens that the term “JUULing” has been devised to signify the practice of using it. The product’s impressive rise in popularity has prompted public health officials to declare a “youth e-cigarette ‘epidemic’ that could be the “health problem of the decade.” Products like JUUL are addicting a new generation of young people and risks reversing the decades of the progress our nation has made in reducing youth tobacco use. PAX Labs introduced the JUUL electronic cigarette in 2015 before JUUL Labs spun out as an independent company in 2017. Since 2017, JUUL Labs has taken the e-cigarette market by storm. The company was founded by former smokers and University of Stanford graduates, James Monsees and Adam Bowen. While graduate students and before founding JUUL, James Monsees and Adam Bowen created a company called Ploom and later developed the PAX Vaporizer, a device for cannabis and loose-leaf tobacco. According to the JUUL website, the company was founded “with the goal of improving the lives of the world’s one billion adult smokers by eliminating cigarettes.” The company’s headquarters are in San Francisco, and as of 2018, JUUL Labs employed over 1,500 people. On December 20, 2018, Altria bought a 35 percent stake in JUUL for $12.8 billion, and according to Wells Fargo, the deal valued JUUL Labs at $38 billion.  JUUL became the most popular e-cigarette in the United States by the end of 2017 and now enjoys a 72 percent share of the e-cigarette market.

How does JUUL work?

JUUL devices are battery operated and work by heating pods of e-liquid which contain nicotine, flavorings, and other chemicals. When the JUUL pod is heated, the liquid becomes an aerosol that is inhaled by users.  JUUL claims one pod is roughly equal to a pack of cigarettes, or 200 cigarette puffs. According to a Truth Initiative study published in Tobacco Control, 63 percent of young people who use JUUL don’t realize the product always contains nicotine. JUUL pods are available in sweet flavors including mango, fruit, cucumber, crème brulee, and mint.

How is JUUL different from other e-cigarettes? JUUL has one of the highest levels of nicotine among e-cigarettes available on the market. Before JUUL, e-cigarette and vaping liquids had nicotine concentrations mostly between 1.5% and 2.4%.  Using nicotine salts rather than the freebase nicotine used by other manufacturers, JUUL entered the e-cigarette market in 2015 with an e-liquid that had a nicotine content of 5%. The manufacturer claims that JUUL delivers nicotine more effectively and at higher doses than other e-cigarette brands. JUUL is more discreet and disguisable in comparison to other e-cigarette brands, which is one reason it is so popular among youth and young adults. A JUUL device is small enough to fit in the palm of a closed hand. JUUL’s entrance into the e-cigarette market has sparked a “nicotine arms race” resulting in numerous knockoff devices which match and at times exceed JUUL’s already extremely high nicotine content level.

How did JUUL get so popular? 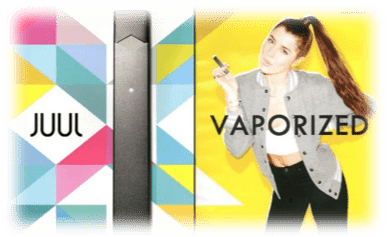 Where are kids getting JUUL?

In April 2018, the Truth Initiative surveyed a national sample of more than 1,000 12- to 17- year-olds to find out how young people are getting JUUL. The most common way youth got JUUL was through physical retail locations (74 percent), which includes gas stations, convenience stores, and vape shops. 52 percent of those surveyed said they received JUUL from a social source like a friend or family member. Only 6 percent reported that they received the product online, however, 89 percent of those who attempted an online transaction were successful.

Why do youth use JUUL? Using data from the 2016 National Youth Tobacco Survey, the Centers for Disease Control and Prevention and the Food and Drug Administration examined self-reported reasons for using e-cigarettes among middle and high school students. According to the report, the most common reason students use e-cigarettes was that a friend or family member used them (39 percent). The second most common reason for underage e-cigarette use was found to be due to the availability of flavors, such as candy, mint or fruit (31 percent). The belief that e-cigarettes are less harmful than other forms of tobacco, such as cigarettes, accounted for the third most common reason youth use e-cigarettes (17.1 percent). According to a Truth Initiative study published in Tobacco Control, 15- to 17-year-olds are sixteen times more likely to use JUUL compared with those aged 25-34.

What are the risks associated with JUUL? Nicotine is harmful to adolescent brain development and can affect attention, learning, and susceptibility to addiction. Youth and young adults are at risk for the long-term effects of nicotine exposure on their developing brains. According to the U.S. Surgeon General, these risks include addiction, mood disorders, and permanent lowering of impulse control. Because of JUUL’s high nicotine content level and youth’s susceptibility to addiction, JUULing increases the risk of becoming a regular cigarette smoker. According to a December 2017 study by the University of Pittsburgh Schools of the Health Sciences, young adults who use e-cigarettes are four times more likely to begin smoking combustible cigarettes within 18 months. The risk of addiction is so high that the U.S. Surgeon General has warned that any and all use of nicotine by youth is unsafe.

The FDA states that 90 percent of adults in the United States who currently smoke were already smokers by age 18. The aerosol from e-cigarettes is not harmless, as vapes have been found to contain lead, nickel, tin, silver, formaldehyde, manganese, toluene, and other chemicals linked to cancer and central nervous system problems. Health problems caused by tobacco use include, but are not limited to, tooth decay, damaged metabolism, frequent coughing and breathing issues, and increased phlegm. Not only can kids become addicted to nicotine through the use of JUUL, but they can also develop serious injuries like seizures and lung damage. These injuries could be related to the flavored pods and ingestible nicotine in JUUL devices. Scientists are working to fully understand the health effects of e-cigarette use, both for users who inhale from a device directly and those exposed to the aerosol secondhand.

What is being done to stop JUUL? 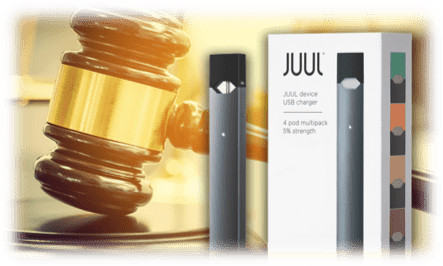 Although the companies deny it, it is evident that JUUL and Altria have an interest in addicting a new generation of smokers and gaining customers for life. JUUL’s explosive growth and immense popularity have drawn scrutiny as the company faces FDA regulations and lawsuits. There are currently pending lawsuits against JUUL, Altria, and Philip Morris, alleging that the companies targeted youth and young adults through misleading marketing on social media and other advertising platforms. Many of the lawsuits have been filed by parents on behalf of their children who have become addicted to nicotine as a result of JUUL. The lawsuits are based on theories of design defect, failure to warn, unjust enrichment, fraud, negligence, and unfair and deceptive trade practices.

On June 13, 2019, the United States House of Representatives launched an investigation into the e-ciggarette company looking into the company’s social media and advertising practices, while also seeking documents related to the company’s deal last year with Altria. In addition, the attorney general of North Carolina has filed a lawsuit against JUUL for the company’s advertising in the state, alleging that the company sought to attract and retain customers who were underage. It is expected that JUUL will continue to face regulations and lawsuits, while the company’s popularity among youth and young adults may become its ultimate downfall. Our attorneys are investigating cases related to nicotine addiction and other injuries from JUUL e-cigarettes, including stroke, seizures, heart attack, lung damage, and asthma exacerbation, in teenagers and young adults.

While JUUL and tobacco company Altria claim a shared desire to prevent kids from using their products, we believe the companies’ actions tell a different story. If you have or your child has become addicted to nicotine or developed another injury because of a JUUL device, please feel free to contact our office to discuss a potential case. We are also happy to investigate potential referral cases regarding JUUL injuries. Contact the personal injury attorneys at Goza & Honnold, LLC today at (913) 451-3433 for a free consultation.

The attorneys at Goza & Honnold are happy to review your case, and we thank you for the trust you place in our firm.

Disclaimer: This blog post could be considered attorney advertising. It is not intended as legal advice. This blog post is intended to inform, and receipt or reply does not create an attorney-client relationship. The choice of counsel is an important decision that should be made after an investigation into a firm and should not be based on advertising alone.